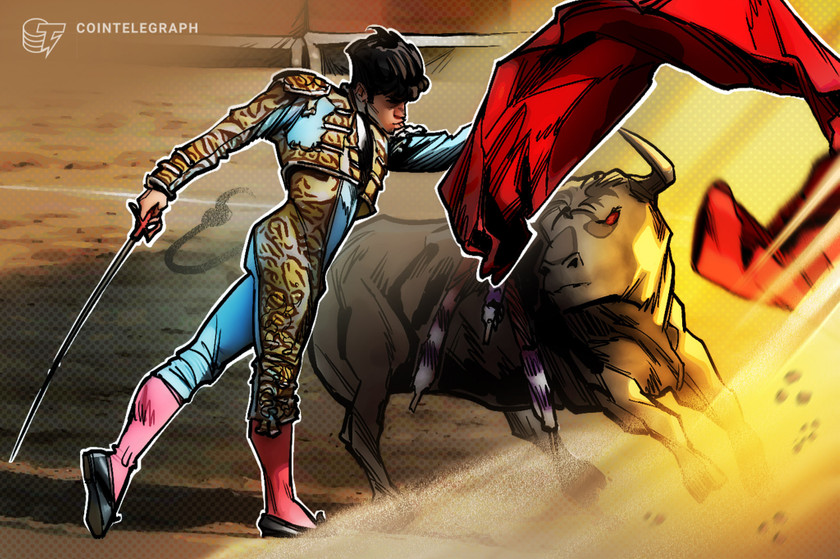 Newbie crypto traders should be wary of bull traps. If you suspect one is on the way, here are some tips to identify it.

How to identify a bull trap

Here’s how to spot a bull trap with some tell-tale indicators that one is on the way:

A high RSI might be an indication of a potential bull or bear trap.

A relative strength index (RSI) calculation may be used to identify a possible bull or bear trap. The RSI is a technical indicator, which can help determine whether a stock or cryptocurrency asset is overbought, underbought or neither.

The RSI follows this formula:

The calculation generally covers 14-days, although it may also be applied to other timeframes. The period has no consequence in the calculation since it is removed in the formula.

In the instance of a probable bull trap, a high RSI and overbought circumstances suggest that selling pressure is increasing. Traders are eager to pocket their gains and will most probably close out the trade at any moment. As a result, the first breakout and uptrend may not be an indication of continuing price rises.

Lack of increase in volume

When the market is truly breaking out to the upside, there should be a noticeable increase in volume because more people are buying the security as it rallies higher.

If there is little or no increase in volume on the breakout, it’s a sign that there isn’t much interest in the security at that price and that the rally might not be sustainable.

A price rise without a significant increase may also probably be due to bots and retail traders jockeying for position.

When a stock experiences a sharp drop or gap-down with enormous red candles but then rebounds very gently, it’s an indication of a bull trap.

The natural tendency of the market is to move in cycles. When it reaches the top of a cycle, it is generally a period of consolidation as the bulls and bears battle it out for control.

This lack of momentum can be considered an early warning sign that the market is due for a reversal.

A decline in price is indicated by a sequence of lower lows and lower highs.

Trends in stock prices do not always change when advances are made. A downtrend is still intact as long as the price increase does not exceed the most recent lower high.

Lack of confirmation is one of the most frequent mistakes made by those caught in bull traps. They should already suspect that if the present high does not surpass the previous high, then it is in a downtrend or a range.

This is typically considered a “no man’s land,” one of the worst places to begin a purchase unless you have a good reason to do so.

Although some traders may be disappointed by this, most are better off waiting for confirmation and buying at a higher price than attempting to “get in early” and be trapped.

The first indication of an approaching bull trap is a powerful bullish momentum maintained for a long time, but which reacts swiftly to a particular resistance zone.

When a stock has established itself as a strong uptrend with little bearish pressure, it implies that buyers are flooding in all of their resources.

However, when they reach a resistance level they’re unwilling or afraid to breach, the price will typically reverse before going even higher.

In the last stage of the trap, a huge bullish candle usually takes up most of the immediate candlesticks to the left.

This is generally a last-ditch effort by the bulls to take control of the market before the price reverses. It could also occur due to several other reasons:

Formation of a range

The final feature of a bull trap arrangement is that it creates a range-like pattern on the resistance level.

The price of an asset is said to bounce back and forth amid a support and resistance level when it fluctuates within a range.

Because the market might still be creating smaller, higher highs, this range may not be perfect, especially on the upper end. Yet the start of the bull trap is visible, as the huge candle previously stated forms and closes outside of this range.

What causes a bull trap?

Many factors bring about a bull trap, and one of the most common is a lack of buying volume on the rally back up to the previous high.

Weak buying volume is an indication that there isn’t much interest in the security at a specific low price and that the bulls aren’t strong enough to push the price higher.

Another common cause of bull traps is a false breakout from a consolidation pattern. The price breaks out of a range to the upside, but then quickly falls back down and resumes its downtrend.

How does a bull trap work?

Bull traps can lead to severe consequences for those purchasing during a perceived reversal.

Let’s say you’re looking at a chart of an asset in a downtrend. After a while, the price reaches a point where it starts to consolidate sideways in what’s called a “range.”

At some point, there is a breakdown from the range as the bears win, and the price falls to a new low. Just when it seems like the downtrend is about to resume, however, the bulls make a comeback and push the price back up to its previous high.

Many traders see this as a bullish reversal and start buying, thinking that the downtrend has ended. Unfortunately, this is usually just a temporary move, and the price soon resumes its downward trend, leading to heavy losses for those who bought at or near the top.

What does a bull trap mean in the crypto market?

Also referred to as “dead cat bounce,” bull traps are often seen in crypto due to speedy recoveries.

In crypto, bull traps work as they do in any other market. For instance, if the price of an altcoin has been rising steadily over the past few days, you may believe it will continue to rise. You buy some and wait for the price to go up so you can sell it at a profit.

However, the opposite happens, and you find yourself trapped in a losing position. You witness the downtrend and then wait for a bullish reversal when you can buy the dip, thinking you’re purchasing the asset at a good price. The trap reveals itself as such when the price retreats and goes back on the downtrend.

Role of psychology in bull traps

Bulls chase and ride the high of bull conditions, which can all be well and good until the next bear market returns.

When this happens, they can get caught in a bear trap where they may liquidate their position at a loss. Due to a unidirectional mentality (strictly bear or bull), investors accustomed to trading in a bull market might fall into the trap of buying high and selling low. Experts suggest having a bidirectional mentality to succeed in both bull and bear markets, as this allows for greater profits during long-term trends.

What are bull traps used for?

Bull traps are used by both day traders and long-term investors to take advantage of unsuspecting market participants.

For day traders, a bull trap can be an opportunity to short the security as it rallies back up to the previous high. The price will then resume its downtrend, leading to profits for the trader.

For long-term investors, a bull trap can be an opportunity to buy the security at a lower price as it falls back down after the rally. They are then able to hold the security for the next uptrend.

What is a bull trap in trading?

In trading, a bull trap is a situation where a trader buys an asset believing its price will continue to rise, only to see it fall sharply after reaching a new high.

Bull traps occur during periods of market uncertainty or when false information is circulating about a particular asset. It’s called a bull “trap” because traders who are none the wiser are made to believe that a declining asset is actually on the rise. This false sense of security can lead to heavy losses.

When a bull trap is suspected, traders should exit the trade immediately or enter into a short position. Stop-loss orders can come in handy in these scenarios, especially if the market is moving swiftly, to avoid being swept away by emotions.

As with a lot of things in trading, identifying a bull trap can be difficult. However, the best way to avoid bull traps is to notice warning signs in advance—such as low volume breakouts. We’ll discuss this further below.

What is a bull trap, and how to identify it? originally appeared on CoinTelegraph.com